The GiggleBot comes with a couple of onboard sensors:

The GiggleBot comes with two light sensors right in front of the LED on each eye. They are very small and easy to miss. However, they are more versatile than the Micro:Bit’s light sensor as they can be read together to detect which side is receiving more light. 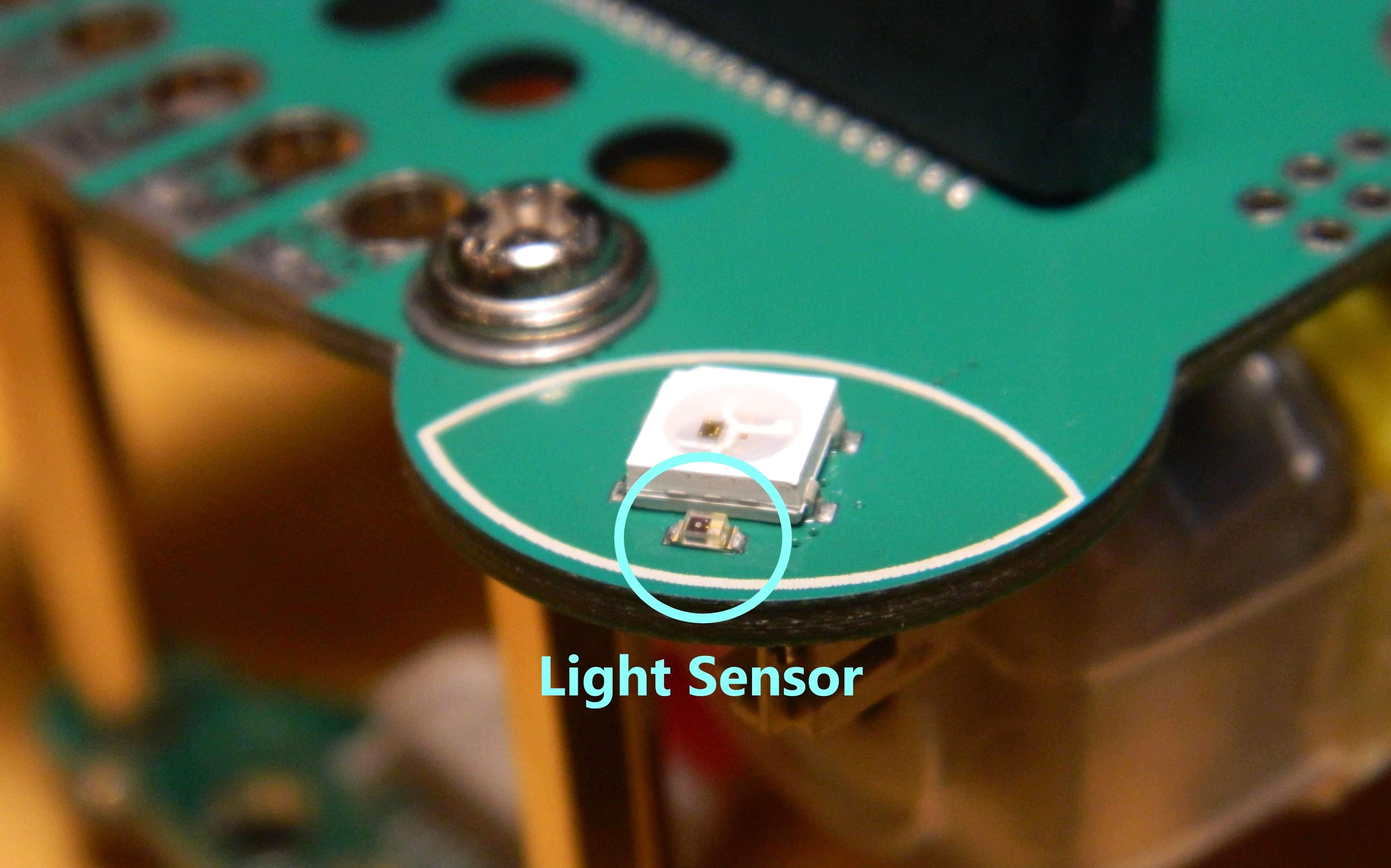 Here’s how to read both light sensors in one call:

And here’s how to read just one side at a time:

This tutorial will turn the GiggleBot into a cat, following a spotlight on the floor. Many cats do that when you shine a flashlight in front of them, they will try to hunt the light spot. When running this code, you will be able to guide your GiggleBot by using a flashlight.

This is how to use this project:

First, a bit of explanation on the algorithm being used here.

On starting the GiggleBot, the Micro:Bit will:

This forever loop only waits for one thing: for the user to press button A, and that’s when the light chasing begins.

How to Chase a Light:

What else can be done with the light sensors?

You could modify this code to turn the GiggleBot into a night insect? Those would avoid light instead of chasing it.

You could detect when it gets dark or bright. Imagine the GiggleBot inside your closet. When someone opens the door, the sudden light can be detected. The GiggleBot can let you know someone went through your things while you were away.

In front of GiggleBot, attached to the body, there is a line follower sensor. It contains two line sensors. You can spot them from the top of the line follower by two white dots. And from the bottom, they are identified as R and L (for right and left)

The easiest way of reading the sensors is as follow:

The lower the number, the darker it is reading. Values can go from 0 to 1023 and depend a lot on your environment. If you want to write a line follower robot, it is best to take a few readings first, to get a good idea of what numbers will represent a black line, and what numbers represent a white line.

Calibrating the line follower means figuring out which numbers get returned when it’s over a black line, so that you can later code an actual line follower robot.

The best approach for this is to get readings in various parts of your line, from both sensors, for both the black line and the background color.

The following code will display the values onto the microbit leds when you press button A, allowing you to manually position your robot around your circuit and take readings.

Once you have gotten readings from the line sensors, you are ready to code a line follower robot.

Here we are coding for a line that is thick enough that both sensors can potentially be over the line. The robot will stop if it loses track of the line, in other words, if both sensors detect they’re over the background color.

We are also using the LEDs on the LED smile to indicate what is going on while we follow the line.